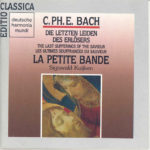 Like his father Johann Sebastian, Carl Philipp Emanuel Bach exchanged a position at court for a challenging job as cantor and music director. As a chamber musician of the Prussian king Frederick the Great in Berlin, he had become the most respected composer of his time. Yet his transition to cosmopolitan Hamburg in 1768 felt like a liberation. At last he was able to focus freely on his own sensitive style full of refinement, expression and originality. This is also the case in Die letzten Leiden des Erlösers (Wq 233), the 1770 passion cantata for five soloists, choir and orchestra. This rarely heard masterpiece on text by poet Anna Louisa Karsch had the quality, like no other, of “touching the hearts” and expressing the suffering of Christ with the greatest empathy. No wonder it would stay on the Holy Week poster for fifteen years in a row!