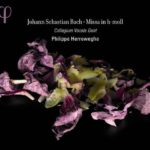 Concert exclusively for the Friends of Flagey