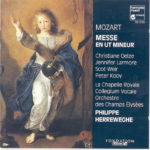 This concert has been cancelled due to the current covid regulations in Austria.