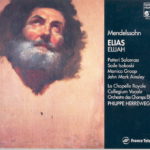 After the success of Paul Mendelssohn spent years looking for a fitting text to a second oratorio. The invitation to direct the 1846 Birmingham Music Festival and conduct a new piece there sparked a burst of creativity, and ultimately his masterpiece Elijah. At its premiere, the applause from the audience of 2000 for the 400 performers was deafening. After the London performance, Queen Victoria herself praised ‘the great master, who makes us conscious of the unity of his conception, through the whole maze of his creation, from the soft whispering to the mighty raging of the elements’.